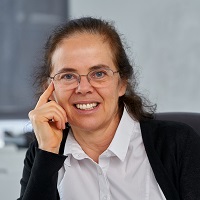 Éva Tardos is a Jacob Gould Schurman Professor of Computer Science at Cornell University, currently chair of the Department of Computer Science for a second term after being chair 2006-2010. She was Interim Dean for Computing and Information Sciences 2012-2013 and more recently was Associate Dean for Diversity & Inclusion at Cornell University. She received her BA and PhD from Eötvös University in Budapest. She joined the faculty at Cornell in 1989. Tardos’s research interest is algorithms and interface of algorithms and incentives. She is most known for her work on network-flow algorithms and quantifying the efficiency of selfish routing. She has been elected to the National Academy of Engineering, the National Academy of Sciences, the American Philosophical Society, the American Academy of Arts and Sciences, and to the Hungarian Academy of Sciences. She is the recipient of a number of fellowships and awards including the Packard Fellowship, the Gödel Prize, Dantzig Prize, Fulkerson Prize, ETACS prize, and the IEEE von Neumann Medal. She co-wrote the widely used textbook Algorithms Design. She is editor editor-in-Chief of the Journal of the ACM, has been editor-in-Chief of SIAM Journal of Computing, and editor of several other journals, and was program committee member and chair for several ACM and IEEE conferences in her area.