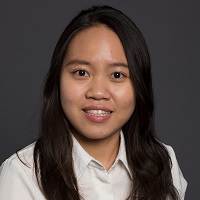 Abstract: Unravel the Atmospheric Escape of Heavy Ions from the Polar Wind

Atomic N+ and O+ as well as molecular N2+ NO+ and O2+ ions are the major ion species in the Earth’s low altitude atmosphere. While numerous studies have focused on the dynamics of the ionospheric O+ ions the relative contribution of outflowing N+ and molecular ions is not well understood at this time most likely due to limiting capabilities of instruments flying in the space to distinguish between the two species. However the existing observational records suggest that N+ are constant companions of outflowing O+ ions and during geomagnetically active times the increase in molecular ions were often accompanied by a high ratio of N+/O+ in the Earth’s ionosphere-magnetosphere system. To understand how these heavy ions other than O+ ions acquire the sufficient energy to escape the Earth’s atmosphere we have employed a first-principles physics model to study how these heavy ions are accelerated in the polar wind. The numerical simulations suggest that N+ and molecular ions always play a key role in the polar wind plasma since they could redistribute the ion composition of polar wind from few hundred kilometers to thousands of kilometers in the space. Validated with previous studies as well as observational records the inclusion of N+ and molecular ions also leads to the better numerical solution. Though the molecular ions have the short dissociative recombination lifetime the energization mechanisms such as wave-particle interactions could provide sufficient energy to allow these heavy elements escaping the Earth’s atmosphere once produced by the photoionization. This indicates that tracking the molecular ions helps understand the energization of fast ion outflow and assess the role of heavy ion outflow in the overall dynamics of the polar wind.

Mei-Yun is a Ph.D. candidate in HeRA group within the Department of Electrical and Computer Engineering in University of Illinois at Urbana-Champaign advised by Prof. Raluca Ilie. Her primary research focus is understanding the acceleration mechanisms responsible for ionospheric outflow and its impacts on the magnetospheric dynamics. Before coming to the United State for graduate school Mei-Yun obtained the bachelor’s degree in the Department of Electrical Engineering from the National Taiwan University in Taiwan where she is originally from. She has been awarded the NASA FINESST fellowship in 2021 to continue her research on the contribution and the energization mechanisms of heavy ions in the polar wind. Her works had also been recognized by the American Geophysical Union where she was awarded the Outstanding Student Presentation Award in both 2019 and 2020. Other than research Mei-Yun currently serves as the Student Representative of the NSF Geospace Environment Modeling Program.